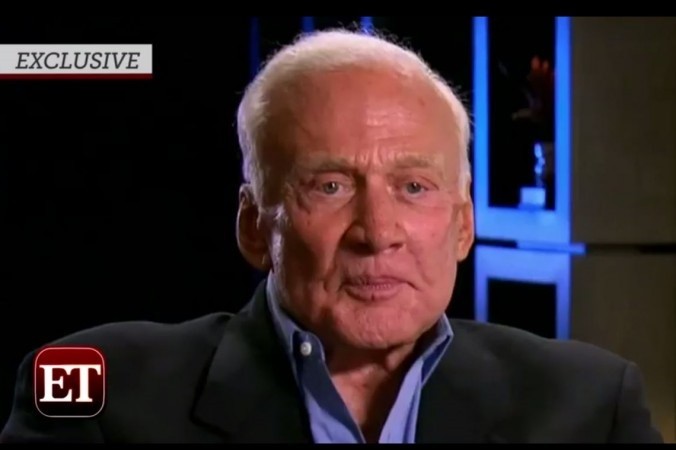 The universe is full of mysteries that challenge our current knowledge. In "Beyond Science" Epoch Times collects stories about these strange phenomena to stimulate the imagination and open up previously undreamed of possibilities. Are they true? You decide. Buzz Aldrin, the second man to walk on the moon, has said he spotted a UFO while on the Apollo 11 mission. He first made the comments publicly in a 2005 interview with the Science Channel, though afterward he said he was quoted out of context. Now, the makers of “Sharknado” are coming out with a new show titled “Aliens on the Moon,” and Entertainment Tonight reported Wednesday that Aldrin confirmed the sighting when interviewed for the program.

The program looks at additional evidence that extraterrestrials may have structures built on the Moon.

Aldrin also appeared on Reddit last week to answer questions from users of the social media site. He was asked about his reported UFO sighting. His response reads as follows:

“On Apollo 11 in route to the moon, I observed a light out the window that appeared to be moving alongside us. There were many explanations of what that could be, other than another spacecraft from another country or another world—it was either the rocket we had separated from, or the 4 panels that moved away when we extracted the lander from the rocket and we were nose to nose with the two spacecraft. So in the close vicinity, moving away, were 4 panels. And I feel absolutely convinced that we were looking at the sun reflected off of one of these panels. Which one? I don’t know. So technically, the definition could be ‘unidentified.’

“We well understood exactly what that was. And when we returned, we debriefed and explained exactly what we had observed. And I felt that this had been distributed to the outside world, the outside audience, and apparently it wasn’t, and so many years later, I had the time in an interview to disclose these observations, on another country’s television network. And the UFO people in the United States were very very angry with me, that I had not given them the information.

“It was not an alien. Extraordinary observations require extraordinary evidence. That’s what Carl Sagan said. There may be aliens in our Milky Way galaxy, and there are billions of other galaxies. The probability is almost CERTAIN that there is life somewhere in space. … But the distances involved in where some evidence of life may be, they may be hundreds of light years away.”

He said NASA’s “resources should be directed to outward, beyond-the-moon, to establishing habitation and laboratories on the surface of Mars that can be built, assembled, from the close-by moons of Mars.”