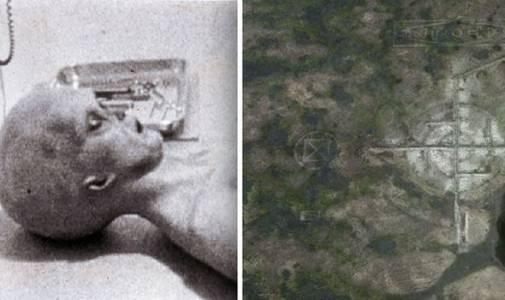 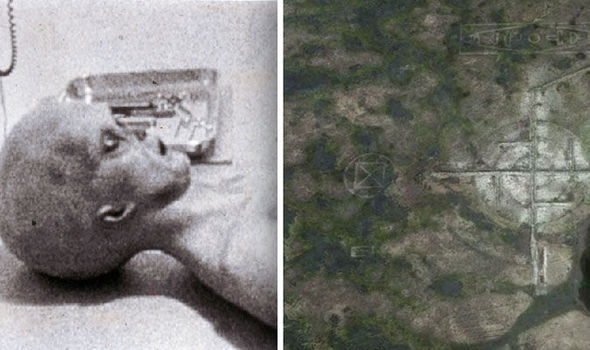 CONSPIRACY theorists claim cryptic rune-like symbols and an inverted Nazi swastika could mark a mysterious alien landing site in the US desert.

Alien hunter websites have been sent into overdrive after the mysterious discovery was made on Google Maps.

The claimed 'crash site' is around 70 miles from Roswell in New Mexico, where UFO legend has it that a flying saucer crashed in July 1947, and the US military covered it up.

The markings on the ground, seen in Google images, also include some that have been described by some conspiracy theorists as "Nazi occult symbols". There are several long-standing conspiracy theories about Hitler and the Nazis experimenting with the occult and making contact with aliens in secret bases, including in the Antarctic, which have fuelled speculation about the new discovery.

Pseudo-science and archaeology website Ancient Origins has picked up on the images.

Its website said: "People have claimed that the enigmatic symbol found near Roswell is the result of Nazi occultism and even alien worship, due to its proximity to Roswell, where one of the most famous UFO sightings in history occurred."

But Ancient Origins concluded the patterns were more likely made by the US Air Force as target practice for bombers.

It would not be the first time this has happened.

In 2007, the US Navy was forced into an embarrassing apology after satellite imagery exposed how the Coronado Naval Amphibious Base in San Diego had been designed in the swastika shape.

But others believe the Roswell symbols have been there much longer.

Ancient Origins added: "However, this theory isn’t widely accepted by everyone, as there are many people who believe that the enigmatic symbols spread across the land of New Mexico, date back hundreds of years." People have claimed that the enigmatic symbol found near Roswell is the result of Nazi occultism and even alien worship, due to its proximity to Roswell, where one of the most famous UFO sightings in history occurred.

Adding to the mystery is the fact the patterns are also close to the top-secret Area 51 US military base in the Nevada desert - where alien conspiracy theorists claim the "Roswell crashed UFO" was hidden away in 1947.

Scott C Waring, editor of UFOsightingsdfaily.com, is not one to sit on the fence when it comes to proof of aliens.

In a blog posting he took the leap from speculation to say it was a sign pointing out a hidden underground alien base.

While others wondered why a hidden base would have such an unusual "X marks the spot" highlighting it, he said it was to warn oil drillers to steer clear and avoid the cavernous dwelling.

He blogged: "This is not a symbol of Hitler's Nazis, but is the ancient buddha symbol that means pure goodness.

"Also in the writing in the rectangle above is alien symbols, very similar to those found at the Roswell UFO crash on small metal beams and parts.

"So you ask why are aliens writing in the middle of New Mexico?

"There are thousands of oil rigs in this location.

"This is a warning to humans not to damage their base underground."

Even dedicated followers of Mr Waring were not convinced.

Juz Staina posted in response: "I'm a bit surprised with your aviation background you didn't look at all the bombing ranges from back in the war mate, the reason I say this for the first time ever is the battleship is marked for where main guns are and bridge, also the swastika obviously has been added to resemble the basic aiming systems the bombers would have.