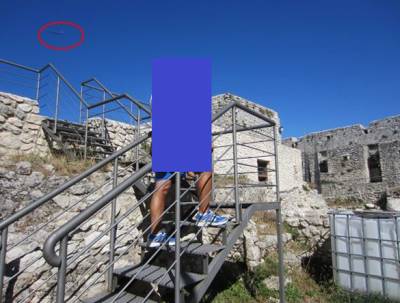 A tourist captured a strange image in one of the photographs she took while visiting Monte Sant’Angelo in Southern Italy. She sent the pictures to local UFO researchers who do not all agree on what she captured in the image.

This case was sent to us this week by the Italian UFO research organization Centro Ufologico Mediterraneo (CUFOM). They say they received this photograph via their website, and found it interesting enough to have their experts take a look.

Close-up of object. The right size has been enhanced. (Credit: CUFOM)

The witness says that she did not notice anything unusual when she took the photograph, but only noticed the strange object once she downloaded it. This typically raises a red flag, because often in these instances the object turns out to be something mundane like a bird or an insect. However, the CUFOM experts don’t believe that to be the case in this instance.

Here is the witness’ complete report (translated via Google translate):

Hello to you all of the UFO Center Mediterranean. I turned to you knowing your great expertise in the field of UFOs and truly believe that you are good. V the contact because I have a photo of the back of a person who was photographing, of i realized just reviewing the shot on the computer, there is a strange flying object that I can not decipher. The photo was taken on 08/17/2013 at 16:00 in Monte Sant’Angelo in the province of Foggia while I was on vacation, with a compact digital camera with a maximum resolution (12.1 mega pixel). At the time of shooting, as mentioned, perhaps to distraction, to the naked eye had not seen any of us anything. We noticed the strange object, I repeat, only at a later time when we downloaded the photos. According to you, what would it be? Thank you. Yours Saluti.Spero that answer me soon. Piermaria.

CUFOM says upon examination of the image, they felt the object was metallic due to the reflections. However, the object appeared streamlined and lacked wings. The witness also said she heard no sound when she took the picture. That shed doubt on the possibility of the object being a plane, for some.

One of the experts for CUFOM disagrees in his report. He says that wings can be seen, and he feels the object was probably an aircraft of some sort, and that perhaps the witness is mistaken when she says she did not hear anything. The wings and the body of the aircraft are pointed out in this image. (Credit: Biagio Fusco/CUFOM)

While some CUFOM researchers agreed that the object could be conventional, others felt that it was more likely to be a drone, due to the lack of sound and the ability of some drones to make very little noise.

However, according to CUFOM, many of the aviation experts they consulted said the shape of the object did not conform to conventional aircraft, drone or otherwise.