UFO experts say 'we are not alone' 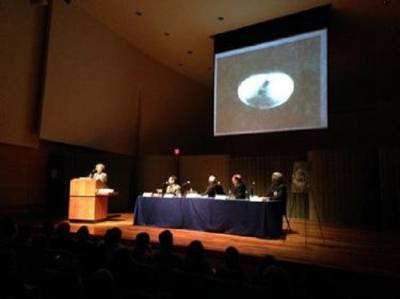 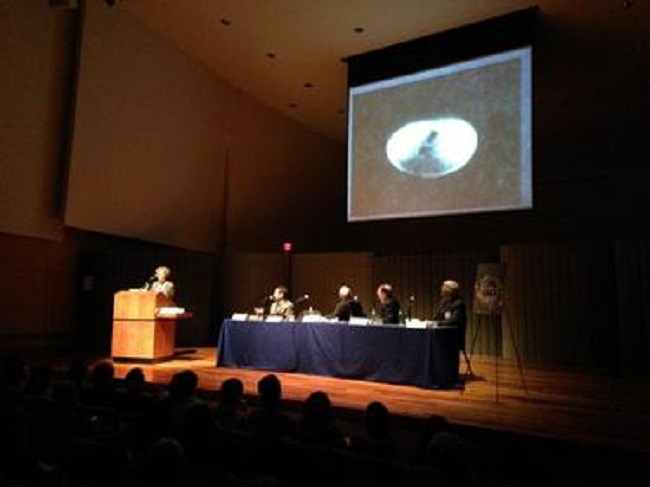 WASHINGTON -- UFOs were the topic of a panel discussion Wednesday night at American University, and one of the speakers used the occasion to reveal evidence he called a "smoking gun."

"We have come into possession of a couple of Kodachrome color slides of an alien being lying in a glass case," author and researcher Thomas Carey told the near-capacity crowd in Abramson Recital Hall. What's interesting is, the film is dated 1947. We took it to the official historian of Kodak up in Rochester, New York, and he did his due diligence on it, and he said yes, this filmstrip, the slides are from 1947. It's 1947 stock. And from the emulsions on the image, it's not something that's been Photoshopped like today. It's original 1947 images, and it shows an alien who's been partially dissected lying in a case."

Carey says the being looked like what he thought an alien from the famous Roswell incident would look like.

"3 and a half to 4 feet tall, the head is almost insect-like. The head has been severed, and there's been a partial autopsy; the innards have been removed, and we believe the cadaver has been embalmed, at least at the time this picture was taken. The owners of the slide -- it's an amazing story. The woman was a high-powered Midland, Texas, lawyer with a pilot's license. We think she was involved in intelligence in World War II, and her husband was a field geologist for an oil company."

Carey says he plans to reveal the images early next year.

Another panelist, Dr. Richard Haines, is a retired NASA scientist and co-founder of NARCAP (National Aviation Reporting Center on Anomalous Phenomena), which provides pilots with an anonymous way to report sightings they can't explain.

"We're pretty ignorant yet about what we're dealing with. And that's the birth of a science. That's how most sciences begin," he said.

"Our government is not taking the subject seriously. My role, or mission, if you will, is to bring this to the attention of our aviation world, at the union level, at the airline level and at the government level. I'm finding hardly any difficulty doing that in foreign countries. I'm having a great deal of difficulty in America, and I don't know why."

Leslie Kean is an investigative journalist, co-founder of the Coalition for Freedom of Information and author of the New York Times bestseller "UFOs: Generals, Pilots and Government Officials Go On the Record."

She wrote her first story about UFOs in 2000.

"My whole life was changed at that point. I was so compelled and so interested and so curious about this UFO phenomenon, because the more I studied it, the more I realized that you couldn't write it off. … It's not like you learn ways of explaining it. You learn more and more about the mystery of it, and the incredible documentation that's out there," she said.

During her presentation, she detailed several interesting UFO cases, and showed some photographs, including one of a shiny, circular object.

"This is an incredible photograph that was taken over Costa Rica in 1971 by a government plane, a mapping plane, that had a camera strapped underneath the aircraft. And every 17 seconds it took a photograph of the ground. The dark area is a lake, and ... the lighter area is the land, and over that lake there's a disc-shaped object."

Kean says Chile and France have full-time government staffers who do nothing but seriously investigate UFO cases, and she thinks the same is needed in the U.S.

"I'm trying to make the point that our scientists need to get more involved. In order for that to happen, we need a government agency here that will open the doors to allowing our scientists to engage with this topic."

The most riveting presentation of the night came from retired U.S. Air Force Colonel Charles Halt, one of the witnesses of a famous series of UFO sightings in England in 1980 known as the Rendlesham Forest incident.

Halt says he went into the forest to check out a report that a UFO had landed there. He saw three indentations in the ground that were spaced evenly, and a Geiger counter showed abnormally high levels of radiation in the area.

During this investigation, Halt says, he and several other military members saw a flying, oval-shaped object that glowed bright orange and red, and seemed to be dripping like molten metal.

"We're standing there in awe. I said, 'There's got to be an explanation. Ball lightning, or who knows what.' It starts to move. It moves towards us. It comes into the forest. It's moving through the trees horizontally, bobbing up and down as necessary to miss the trees. I'm thinking, ‘Oh boy. I wish I hadn't come out here. This is really getting beyond me.'"

He says they watched it for a few minutes, until something happened.

"Suddenly and silently, it explodes into five white objects like fireworks, and it's gone."

Halt closed out his presentation this way:

"If I could leave you with one thing, I'd say keep an open mind, and we are not alone. I can assure you."