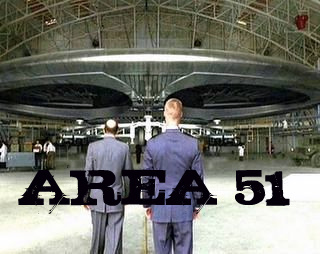 With all the secrecy shrouding Area 51, it's time for some light to be shed. Learn more about the nicknames, entertainment, food, spy planes, and rumors surrounding this infamous site.

On August 15, 2013 the CIA finally acknowledged the existence of Area 51.After repeated freedom of information request made by George Washington University the CIA lifted the veil of secrecy on Area 51. This does not mean they are talking openly about UFOs and military secrets but it does open the door for lawsuits from former employees and their families.

The name ‘Area 51’ derives from its marking on 1950’s Nevada Test Site maps. Today, the official name of Area 51 is Air Force Flight Test Center, Detachment 3, or AFFTC Det. 3 for short. For years even our own government denied its existence until Soviet pictures confirmed what many knew all along. The base did exist. The facility was originally designed for the testing of U-2 spy planes, and ultimately Stealth technology would be born there. The secret site has grown to many times its original size. The USAF took over command of Area 51, and its airspace in 1970. Area 51 was also referred to as Groom Lake (the name of the dry lake Area 51 was built around), Paradise Ranch (a half-serious way to entice employees to accept positions at the remote, rustic base), Watertown (the official name of the test site, given in 1956), and Dreamland (after an Edgar Allan Poe poem).
Area 51’s nickname DREAMLAND was allegedly derived from an Edgar Allan Poe poem by the same name. It admonishes that “the traveler, traveling through it, may not-dare not openly view it; Never its mysteries are exposed, to the weak human eye unclosed.”
The first known use of the area was the construction in 1941 of an auxiliary airfield for the West Coast Air Corps Training Center at Las Vegas Air Field. Known as Indian Springs Airfield Auxiliary No. 1, it consisted of two dirt 5000' runways.

Under President Dwight Eisenhower the Groom Lake facility was put in the hands of the CIA for Project Aquatone, for the development of the Lockheed U-2 reconnaissance aircraft in April 1955.
This mysterious fortress and its surrounding grounds are strictly off-limits. What secrets are kept inside this highly guarded facility? The rumors abound. Yes, there have been pictures of craft doing amazing maneuvers over these guarded skies and pictures and video smuggled from inside have become legend. These smuggled articles show living and dead aliens, spacecraft of futuristic design, but still the government denies these claims.
Helen Frost, whose husband Robert died in 1988 from the fumes, filed a lawsuit against the government in 1996 but the case was dismissed by the judge because the government could neither confirm nor deny the allegations, and it was also stated that the base is exempt from any environmental laws.
During the 70's and 80's the workers at Area 51 were exposed to jet fuel toxins like JP7. Supposedly old computer parts were also burned in trenches. The workers were ordered to go into the trenches and mix up the material and were only allowed to wear protection up to their waist. The A12 Oxcart
When Area 51 was chosen as the testing site for the A-12 OXCART, a new, 8,500-foot runway had to be built. So as not to draw attention, contractors worked under cover of night.
Flying at 2,200 mph, it took OXCART pilot 186 miles just to make a U-turn. To accommodate the plane, an additional 38,400 acres of land around the base had to be withdrawn from public access and the restricted airspace expanded to create a 440-square mile box.
Early on, the only entertainment at Area 51 consisted of a single cement tennis court and a small bowling alley. There was no television, and radio signals only made it through the surrounding mountains in the evening.
The Area 51 mess hall sometimes served lobsters and oysters. Once a week it was steak night.
There is a sliver of truth to the conspiracy theory that the moon landing was staged at Area 51. Various space equipment – including land rovers and life support systems – were tested by the astronauts at the adjoining nuclear testing grounds.
Area 51 has not been spared by the downturn in the economy, it is estimated that there are 1600 to 2000 employees working at the military facility involving at least a dozen defense contractors as of 2013. This is down by 200-400 employees since 2012.
A recent poll showed that 70%+ of Americans believe that UFOs are real.
After an increase in UFO sightings in 1952, the CIA concluded that “there is a remote possibility that they may be interplanetary aircraft,” and that it was necessary to investigate each sighting.
90% of reported UFO sightings could be easily debunked, while the other 10% were “a number of incredible reports from credible observers.”
Over half of all UFO reports from the late 1950s through the 1960s were accounted for by manned reconnaissance flights (namely the U-2) over the United States, virtually all originating from Area 51. The A-12 OXCART required special fuel in order to fly at such extreme speeds and heights. The fuel was made to withstand extremely high temperatures and would not ignite even if someone threw a match into a barrel full of it.
The OXCART cruised at 2200 miles per hour, but because the plane was secret it was kept out of official speed competitions.
The A-12 OXCART consisted of more than 90% titanium. It was the world’s first titanium plane.
An A-12 spy plane was used when the USS Pueblo was captured by North Korea to photograph the area and determine the ship's location.
The OXCART's engines acted as vacuum cleaners, sucking up any debris left on the runway. So personnel would vacuum the runway before each test flight.
The Air Force has acknowledged the existence of the Nellis Range Complex near the Groom Dry Lake for many years now. There are a variety of activities, some of which are classified, throughout the complex.
The range is used for the testing of technologies and systems training for operations critical to the effectiveness of U.S. military forces and the security of the United States.
Some specific activities and operations conducted on the Nellis Range, both past and present, remain CLASSIFIED and cannot be discussed. The A12 - Spy Plane could travel at 2200 MPH
Suspended upside down, a titanium A-12 spy-plane prototype is prepped for radar testing at Area 51 in the late 1950s.
After a rash of declassifications, details of Cold War workings at the Nevada base, which to this day does not officially exist, are coming to light—including images of an A-12 crash and its cover-up pictured publicly for the first time in May. Remnants of a crashed A-12 spy plane—including two engines and the shattered rear fuselage—litter the ground near Wendover, Utah, in a 1963 picture recently declassified by the CIA and published here for the first time.
After pilot Ken Collins had parachuted to the ground, he was stunned to be greeted by three civilians in a pickup, who offered to give him a ride to the wreckage of his plane. Instead, Collins got them to give him a ride in the opposite direction, by telling them the plane had a nuclear weapon on board—a prearranged cover story to keep the Area 51 craft a secret.
Nearly undetectable to radar, the A-12 could fly at 2,200 miles (3,540 kilometers) an hour—fast enough to cross the continental U.S. in 70 minutes. From 90,000 feet (27,400 meters), the plane's cameras could capture foot-long (0.3-meter-long) objects on the ground below.
But pushing the limits came with risks—and led to the catastrophic 1963 crash of an A-12 based out of Area 51. You won't find it on any geological or aeronautical maps and yet like a place in the Twilight Zone, flights to it leave Las Vegas' McCarran Airport every day. Some say alien aircraft are stored there and reverse-engineered to create new aircraft and weapons, or it's the site of genetic testing or other diabolical plots. Others say it's just a very secret aircraft development site. No matter, what it is, Area 51 remains shrouded in mystery.