What Vampire Graves Tell Us About Ancient Superstitions 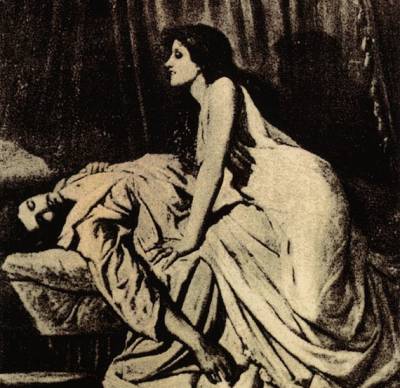 Hundreds of years ago, ignorance about decomposition and disease sparked fears that the dead returned to drink the blood of the living.

In 1846, a man named Horace Ray died of tuberculosis in Griswold, Connecticut. Within the next six years, two of his grown sons died of the same disease. When yet another son fell ill two years later, Ray’s family and friends could think of only one explanation: The dead sons were somehow feeding on and sickening the living one—from the afterlife. In an effort to keep the remaining son from getting even worse, they exhumed the dead sons’ bodies and burned them.

This wasn’t an isolated incident. In 1874, a Rhode Island man named William Rose dug up his own daughter’s body and burned her heart, and in 1875 a victim of “consumption,” as TB was called then, had her lungs burned posthumously for good measure.

This practice of digging up, burning, or otherwise attempting to restrain the deceased was a widespread practice in many Western countries until the early 20th century, and it was intended to prevent what people at the time thought of as vampires: Dead victims of disease that literally sucked the life out of the living from beyond the grave. throughout history everyone from the Ancient Greeks, to the Eastern Europeans, to 19th-century Americans saw them as disease victims (and sometimes simply dead miscreants) who could prey on the living from the Great Beyond.

To keep these fiends from feasting on their villages, the surviving relatives would try to physically keep them in their graves, sort of like setting up an obstacle course for the deceased.

Last year, Bulgarian archaeologists found two skeletons whose chests had been impaled with iron rods near the Black Sea town of Sozopol—apparently a typical treatment for those suspected of post-mortal malfeasance until the early 1900s there. About 100 such skeletons have been uncovered in Bulgaria alone.

This summer in Poland, researchers unearthed remains that had their heads removed and placed in their laps—possibly a sign that whoever buried them wanted to hinder any potential future resurrection by making the vampire find its head first.

One Italian village even buried a suspected vampire with a brick in her mouth.

Part of the reason the myth persisted, it seemed, was widespread confusion over what happens to people after they die. The pagan Slavs obviously didn’t know about decomposition, but even centuries later, people might have been misled by the fact that rigor mortis eventually gives way to flexible limbs, making a corpse seem more lifelike than dead-like. Similarly, a digestive tract’s decaying ooze might have looked like fresh blood to an unwitting villager, and burial shrouds sometimes snagged on the corpses’ teeth, making them appear to be partially eaten. (Some believe this is why in Ulysses, when Stephen sees what he believes is an apparition, he cries, “Ghoul! Chewer of Corpses!”)

Eventually, similar fears migrated to the New World. During tuberculosis epidemics, 19th-century New Englanders began to notice that the relatives of TB victims began to sicken and waste away after their loved one’s death. This was before germ theory took hold, so one popular explanation was that the deceased TB victims were rising from the dead to suck the life out of their loved ones. One Connecticut town, for example, thought the solution was to exhume the remains of the dead relative and arrange the remains in a skull-and-crossbones pattern.

These restless spirits, called Strigoi, are not malicious, but their appearance bodes no good, and may be regarded as omens of sickness or misfortune. More decidedly evil, however, is the vampire, or nosferatu, in whom every Roumenian peasant believes as firmly as he does in heaven or hell.

In 1897, Bram Stoker’s Dracula, which was based partly on Gerard’s work, as well as the 1931 film adaptation, cemented the pasty, bloody-fanged vampire we know today into pop horror consciousness.

It was clear that by then, however, vampires were becoming more of a myth than an actual menace. In a review of Dracula published in 1897, The Guardian explained that Count Dracula “is unable to die properly, but from century to century resuscitates his life of the ‘Un-Dead’...by nightly draughts of blood from the throats of living victims, with the appalling consequence that those once so bitten must become vampires in their turn.”

The newspaper praised Stoker as a powerful author, but it dismissed his genre of choice:

“It is, however, a mistake to fill a whole volume with horrors.”