Wait, Is That a Human on the Moon? 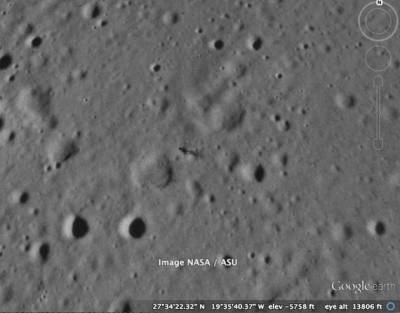 In this age of big surveillance and miniature satellites, there is an idea that—once we are able to track everything around us—the magic and mystery of the universe will be replaced with data, knowledge, and understanding.

Yet it often seems like the deeper we get into the world around us, the more we realize how little we actually know. A mountain of data may promise us answers, but first you have to sift through the questions.

The latest evidence: A YouTube video that's circulating and shows what looks like a human figure standing on the surface of the moon. It's been a generation since humans ruled out the possibility of life on the moon—let alone a giant humanoid just chilling on the lunar surface. So, uh, what is that thing? NASA, which has checked the image against its trove of images from the same location, is shrugging it off.

"We have other images that do not show any imperfection so most analysts believe the image reflects nothing more than a tiny piece of debris on the lens," spokesman Robert Jacobs told me. (And in a follow-up email: "Believe me, if there was a man on the moon, we’d be recounting our own astronauts to make sure we got them all back from Apollo and then telling everyone else!")

Fair enough. The rational explanation, after all, is quite often the best one.

And yet there's something about the image that lingers. In a vast landscape of shameless Photoshopping and Internet hoaxes, and at a time where most people have long since given up on the Loch Ness Monster and the Cottingley Fairies, there's still that little tug of wonder—misplaced, though it may be.

Just think: We can zoom in on actual photographs of the actual moon from our unbelievably sophisticated handheld computers. But it's the smudge of dirt on a camera lens that makes people marvel at the depths of what we still don't know.