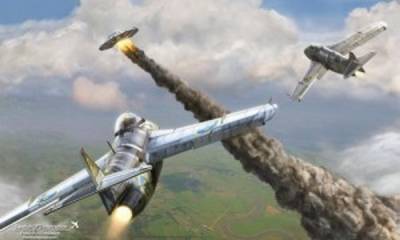 The UFO phenomenon has an nearly inextricable relationship to the world’s military forces. A lot of sceptics believe that a significant quantity of unexplained sightings are actually test flights of secret man-made fighters and bombers. Conspiracy theorists however believe the United States government in particular is in collusion with alien life forms – and that its military’s high-technology weapons have been created with the aid of extraterrestrial intelligence.

One of the first eminent military witnesses of UFO sightings was commanding officer Robert B. McLaughlin of the US Navy. McLaughlin graduated as an engineer and investigated guided missile systems in the 1940s. It was during his time spent as a rocket engine specialist at White Sands, the military proving ground, that he witnessed an unknown flying structure for himself.

In May 1949 he was observing the test of an upper atmosphere rocket, when he saw a light object travelling at a speed of about a mile a second, at an altitude of about 25 miles. In the beginning he thought it was the rocket experiencing a technical glitch, but the object speeded up to a rate far in excess of normal craft. He noted that the object left no vapour trails, and was similar in appearance, placement and motion to other phenomenon reported by staff at White Sands.

read more: 5 Facts You Should Know About UFOs

A year earlier, in January 1948, Captain Thomas Mantell was flying a F-51 Mustang Kentucky when he was asked by air force command to investigate a strange object seen at a high altitude. In broad daylight Mantell flew after the target, but his plane inexplicably plunged to the ground. Subsequent investigators believe he had chased after a ‘Skyhook’ experimental balloon, but ran out of oxygen at high altitude.

This does not entirely tally with Mantell’s own last message, which exposed he’d been approaching a huge metallic object. Whatever Mantell encountered, the US military placed increasing numbers of Air Force fighters at the ready to intersect any other strange flying craft, and the events surrounding many US lost planes in subsequent years were kept highly secret.

The British Royal Air Force has not had such a long history of events involving UFOs, and the first really mysterious incident actually involved an American pilot, Captain William Schaffer, a US Air Force exchange officer. While Schaffer was flying an F6 Lightning over the North Sea, radar stations picked up an unknown object, and he was dispatched to observe. He managed to close on it, but then lost contact.

Radar operators noticed the two blips of Schaffer’s plane and the other object merged to form one, and then separated again. Radio controllers managed to reach Schaffer, who seemed confused. He was ordered to ditch the Lightning and wait for a rescue helicopter to retrieve him. Although other military aircraft witnessed Schaffer’s controlled sea landing, and saw his plane’s cockpit canopy open, he did not manage to escape. In a cloak of secrecy, the RAF raised the Lightning later that year, but few details have ever been released.

The most common and exciting case of military involvement in a UFO case happened in Belgium. On 29th November 1989 hundreds of civilians reported viewing a large dark-colored triangular shape flying across then night sky. This sparked off massive interest in the country, and similar odd craft were seen across Europe.

Then, in 1990, two Belgian Air Force F-16s actually managed to intercept the UFO, but it demonstrated astonishing turns of speed and direction and broke the fighters’ radar lock-on. The Belgian federal government and its military opened up all the data it recorded for public inspection, and it even pledged to have fighter planes on permanent stand-by for UFO watchers. The sightings gradually fell away, but scientists have continued to study the information gleaned during the period.

Episodes such as this support the theory that the world’s military is indeed having aerial rendezvous with the other-worldly craft. Despite sceptical explanations, the sheer range of incidents, and expense and danger involved during them, suggest that governments view the subject seriously. It is claimed that between January and August 1996 the US Department of Defense secretly scrambled fighters up to 23 times for unknown flying objects.

The Belgian authorities in the last case may seem candid and honest, but how much individual authorities know about possible alien invaders is another matter. Whilst various military organisations try to reveal little, the well documented reports of world-wide incidents point to the possibility that Man is, indeed, encountering UFOs first hand.