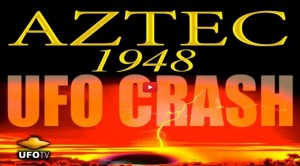 On March 25, 1948 a UFO spacecraft of extraterrestrial origin crashed in a place called Aztec, New Mexico. Sixteen alien bodies were discovered dead inside. The alien bodies and all evidence of their spacecraft were soon transported by government officials to Wright Patterson Air force Base where all traces of this event disappeared in secrecy.

This program documents the shocking facts around this disturbing mystery and includes interviews with leading UFO researchers, a walking tour of the crash site, a tour of the secret US radar station that tracked the UFO crash and the story of an intensive government investigation into alien biology and space technology.