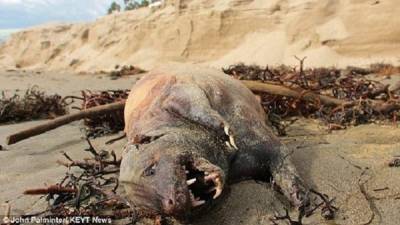 A mysterious creature with sharp claws and pointy teeth was discovered on Tuesday at a beach in Santa Barbara, after the area received some brutal storms and damage. The brownish animal was discovered near a drain washout and has remained unidentified. Residents are baffled by its presence and have been unable to identify the species of animal or where it came from.

No other animals with a similar appearance have been found in the area.

In June of 2012, another pig-like creature was discovered in San Diego by a 19-year-old snowboarder from Lake Tahoe. According to the teenager, the animal was about 2 feet long with a body like a pig. The animal's teeth were also described as "ridiculously" large. In September, Santa Barbara also saw an invasion of an unusual sea creature known as the "by-the-wind sailor", orVelella velella with close relations to jellyfish.